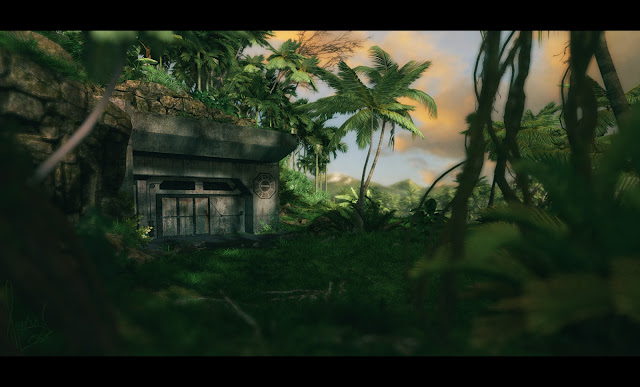 I was a huge fan of Lost and I had for so long the idea to make a picture with a bunker as we know from the series. Now as I understand how it works to use own 3D models with textures in Flowscape I built a simple bunker and a jungle environment in Flowscape.

It is not a really good artwork. It was more a test how it works and what I have to do with the model and the adjustments. It's not good but not bad at all so I wanted to present it here.

Lost is for me one of the best series of all time. Ok, we don't talk about the strange ending. I had so much fun with the series. I have all episodes here and we watched it in one run. It was fun to talk about whats happen after every episode. There were no episode which was boring. The story and the characters were absolutely genius except for the end. This is a problem which often happen to series. Another famous example was Game of Thrones. This is one reason why I love short series like Dark which comes to an end. Dark was by the way my favorite series from Germany which had some similarities with Lost. Maybe I have to thing about a artwork with influence from Dark as a future project. Do you know similar series to view?